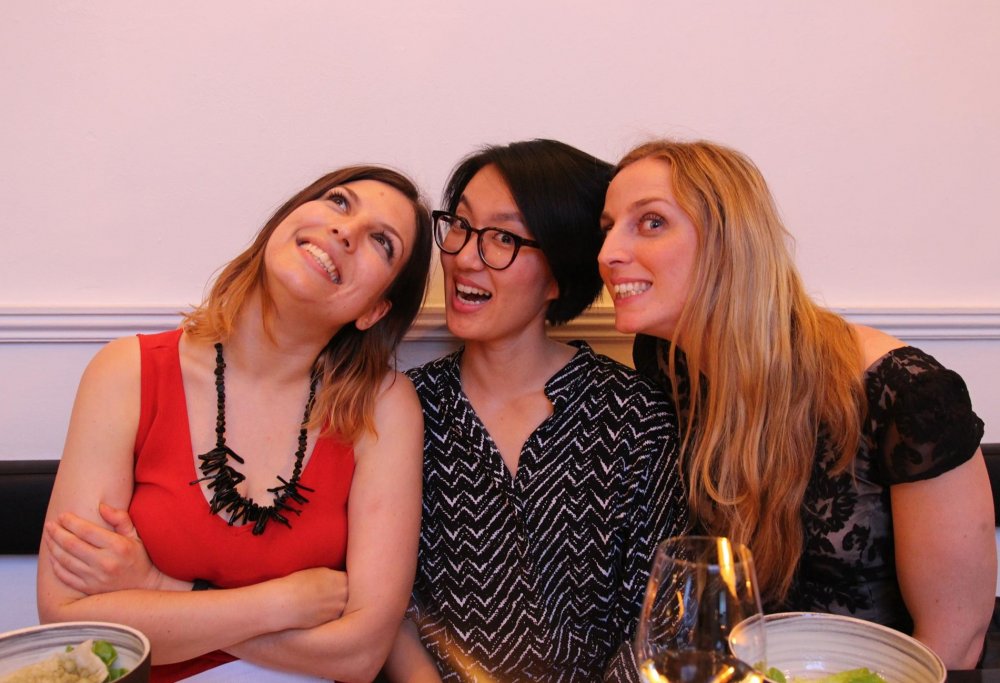 Growing up, I think I had it kinda lucky friend-wise. I have the feeling that most nerdy people don’t find their clique until they’re in Uni, but I made it through school (and even enjoyed the experience) with a fairly awesome group of people.

I’m pretty sure that Ashlee orchestrated the whole thing.

When my old group of friends and I grew out of eachother just as we were starting in on puberty (I lagged a bit with the whole ‘boys’ thing), Ashlee was there to demand that I pair up with her for a school project. The project was to invent a new cereal and, knowing that our teacher who would judge our success had an unhealthy love of chocolate, we threw caution to the wind and create some unholy amalgamation of dried fruit, broken cornflakes and coconut, all bound together with chocolate sauce.

Know your audience, am I right?

I think that we got the highest mark in the class, so it’s possible that our joint love of getting A’s helped to lubricate the first step of our friendship.

Kids are weird you guys.

Luckily, it turned out pretty well, and in year 8, Ikumi bonded with Lauren and brought her into our gang.

You know what? Writing a history of a friendship is also pretty weird. I guess that that’s why we usually reserve that kind of thing for weddings.

Which is anyway where this story is going.

Lauren met Simon, and these crazy kids are getting hitched. Lauren and Simon traveled around Europe in what I’m calling a ‘prehoneymoon’, and we worked out a way to get Ikumi, Lauren and I, back together again in the same city.

Pretty sad that we didn’t get Ashlee at the same time, but we’re holding out for next month’s visit… I arrived late on Tuesday night (cheapest flights), and Ikumi graciously let me chatty her ear off halfway into the night. I’m usually pretty talkative, but at the moment I’m writing my thesis, which is mindnumbingly isolating, so I feel particularly manic every time they let me be away from the computer.

The next morning, she headed off for work, and I sat in her lovely kitchen, drank all of her tea and ate all of her banana cake, and wrote my thesis.

In the mid-afternoon, Simon and Lauren arrived in town, and we headed out to drinks to catch-up.

Which is the point at which I put down my camera, because, obviously, catching up with old friends who you haven’t seen in years and years takes priority.

Here’s the moment when I took out my camera again: Weird huh? Those are smoke-infused baby potatoes with cheese on a bed of straw.

Ikumi met up with us after work, and we headed to Bak. It’s a lovely little restaurant, at a great location, that does a degustation-style fixed (6 or 7 course for dinner) menu focused on local and seasonal produces. This means that you can’t order individually from the menu (they do cater to allergies though), and you don’t know in advance what you’re going to get.

Nonetheless, this was my first time ever degustation-ing, and I was extremely impressed. The food was all amazing, yet every course differed greatly from the previous. And I’ve been to restaurants before where they whack a whole lot of things together just to seem fancy, but in this instance everything really seemed to work. I read a review that the food wasn’t sufficient, which I have to heartily disagree with. I went in hungry, and came out pleasantly full, although not ill-feeling (we did opt for the extra cheese course though). The timing of the courses was great, and the waiters were also super attentive, and really knew their stuff.

And they even patiently put up with my giggling as pre-starters like this (a single cherry tomato) arrived on the table. It was a very good tomato.

I’m not going to spend hours describing all the food, but here’s a few courses worth mentioning. There is steak tartare under there, and it is the kind of turn-back-vegetarians, never-cook-meals-again amazing. There is also a kind of seaweed powder on the fancy prawn cracker, and there was a foamy seaweedy wasabi-y thing (correct me if my memory is wrong guys) mingling with the meat. What you see there is grilled aubergine, which is not only some of the best aubergine that we ever ate, but that also somehow tastes of sticky pork ribs. When the nasturtium leaves came out two courses later, I may have made comments commending them for ‘really using the whole nasturtium’. Braaaaaiiiinnns. This was the only course I didn’t like. Even then, I could completely appreciate the way they had crisply fried the brain-chunk to complement its soft gooey innards,, and the way the lemony sauce gave a bit of tang. But I just can’t with brains. I hate gelatinous meat, and will discard (give to Andy) any meat with a slightly fatty texture. I have memories of my granddad trying to convince my sister and I that brain omelette is a good idea (‘especially if you leave the eggs a bit runny, so they have the same consistency as the brains’).

I tried to eat all of it, but ended up leaving a bit of the ‘meat’ on the plate. Sorry brains. On top of those, we managed a broad-bean and rhubarb course, a fish and purple-carrot course, and two dessert courses. Excellent! The next morning, Lauren, Sime and I made a fairly lazy start to the day… and a pretty piggy one as well. Winkel43 is a cafe that, despite having an actual menu, seems to be visited almost entirely for their apple pie. When Ikumi told Andy and I about it last time, we were pretty skeptical that it was even worth going out just for a pie, but oh! how wrong we were!

This time, staring into the kitchen, we could count at least 30 full apple pies scattered around the room. We spent the rest of the day frolicking around a (rather rainy) Amsterdam, checking out (cheese!) stores and art, posing in front of canals, and generally running around the city.

Lauren and Simon, congratulations on the engagement, and it was so, so lovely to see you both again after all this time.

See you soon on the South Side!